Fort Pierre Chouteau was a trading fort on the high Missouri River plain in the grandest, boldest sense. The late 18th and early 19th centuries were robust and fascinating times in the upper Great Plains. Wildlife, native tribes, and European traders, trappers, and settlers lived and moved in large numbers on the Missouri — early highway to the new frontier. 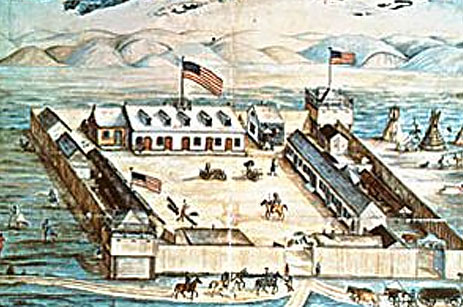 In 1832 the American Fur Company built Fort Pierre Choteau after its predecessor Fort Tecumseh (1822-1832) was dismantled due to the shifting of the Missouri River. It was the largest fur trading post on the upper Missouri River, and became the center of commerce and dominant European settlement for the entire region.

“This fort is undoubtedly one of the most important and productive of the American Fur Company’s posts, being in the center of the great Lakota country, drawing from all quarters an immense and almost incredible number of buffalo robes, which are carried to the New York and other eastern markets and sold at a great profit.”

An average 17,000 buffalo robes were traded each year at the fort for guns, shot, powder, tobacco, blankets, cloth, sugar, salt, coffee, and beads. Historic accounts indicate there were times when the fort was surrounded by hundreds of American Indian tepees. Settlement here helped pave the way for major routes west, including the Bozeman and Oregon Trails, and, of course, the historic Fort Pierre-Deadwood Trail.

The fort was used as a fur trading post until 1855, when it was sold to the Army. Pierre Choutea Jr., hoping to help the U.S. Army decide to buy Fort Pierre, sent Frederick Behman’s 1854 watercolor (above) to General Jesup. Chouteau gave detailed descriptions of the fort’s many buildings which included houses with attics, store houses, stables, sheds, a saw mill, milk and ice house and a powder magazine. Chouteau also listed 24, foot square bastions, two stories high.

The Army dismantled the fort two years later in 1857 to build Fort Randall, and today little remains of the above-ground structure of the Fort Pierre Chouteau and associated buildings. The site has been designated as a national historic landmark.