After gold was discovered in the Black Hills in 1874, there became a need to transport people and freight to the “Hills”. One of the shortest and easiest travel routes was overland from Fort Pierre, S.D., the nearest river landing, to Deadwood, the epicenter of gold mining.

From 1874 to 1908, thousands of tons of freight and hundreds of people arrived in Fort Pierre by riverboat or railroad destined for Deadwood. From Fort Pierre the freight was loaded on wagons pulled by teams of draft animals, usually oxen. The people rode horses, in stagecoaches, in wagons, or walked. From Fort Pierre the wagon trains headed west along the 200 mile route known as the Fort Pierre to Deadwood Trail, which followed an old buffalo trail used by Indians and fur traders. 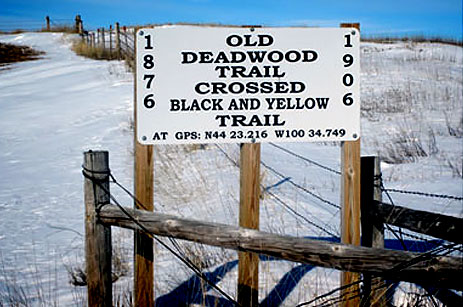 During the 1970’s, and in recognition of our nation’s Bicentennial, local rancher and historian Roy Norman and his wife Edith marked the Trail from Fort Pierre to Grindstone with handmade signs that told the story of the Trail. Many of these wooden signs are in disrepair and some have been destroyed.

A Deadwood Historic Preservation grant has been obtained by the Verendrye Museum, Inc. of Fort Pierre, SD with grand daughter Deb Schiefelbein and Lynn Briggs researching, restoring and replacing the wooden signs while documenting the Global Positioning System (GPS) location on them.

As you travel west central South Dakota, you will notice these signs dotting the countryside west of the Missouri River to the Badlands/Black Hills and south of the Cheyenne River to the Nebraska state line.

Recollections of a Norman Family Member

Roy and Edith Norman were instrumental in the development and growth of their community and the communities of South Dakota. Their initiative, leadership and preservation of many historical interests have left family, friends, and citizens of South Dakota with a history to be proud of and the challenge and opportunity to learn, grow and enrich our heritage for generations to come.

The Normans organized the “Old Stanley County Historical Society” and Roy served as the first president of the organization as well as helped organize the Verendrye Museum opening in 1968 in Fort Pierre.

The Normans devoted much of their time and resources marking the location of the old west trails throughout South Dakota. Beginning in the early 1970’s, the Normans personally dug post holes and painted signs marking the route of the Old Deadwood Trail going west from Fort Pierre. In one year alone, they put up 52 signs. They undertook the task of doing the same for several of the old mail routes, wagon trails, army trails, Indian trails, and stagecoach trails that crisscrossed the prairie. It is estimated that they have erected 250 to 300 signs. To discover the actual trails used by pioneers and Indians, Roy and Edith spent years researching old surveyor’s maps developed in the 1800’s.

It was told to be by my Grandpa Roy Norman at a young age, that the reason he was marking these old trails and historical significances was for us; people of our generation and future generations, and historians, so that we would not lose a part of our history and sacrifices that our ancestors endured to make this great state what it is today.

I feel his mission is being accomplished for the stories he would come home and tell, I know are true! As we scout these old trails the ranchers are telling the same ones and more. And that my friends, is what he wanted the most.