A major encounter which affected the destiny of all inhabitants of the region occurred in Fort Pierre on September 24-28, 1804. At the mouth of the Bad River, in present-day Fischers Lilly Park. Members of Lewis and Clark’s Corps of Discovery met for the first time with the Lakota people, known to them as the Teton Sioux. Differences in trade objectives, diplomacy, and the lack of an interpreter lead to an armed confrontation, the closest Lewis and Clark came to a premature end to their expedition. Today the park is certified as a National Park Service Lewis and Clark National Historic Trail site. 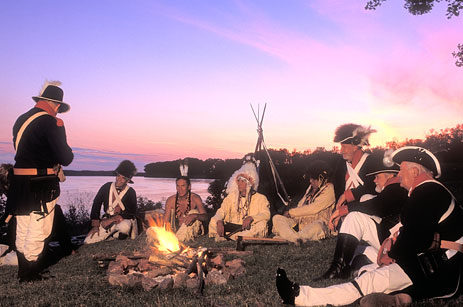 On September 23, 1884, Captains Meriwether Lewis and William Clark and the Corps of Discovery made their first contact with members of the Lakota Nation, when three young boys swam the Missouri River to their evening campsite. For the next five days the two Nations parlayed at the mouth of the Bad River, in feasting, negotiations, and ultimately the armed stand-off which, but for the peace-making efforts of Chief Black Buffalo, might have ended the Expedition. Two hundred years later, the community of Fort Pierre, South Dakota and members of the Lakota Nation commemorated that first encounter with BAD RIVER GATHERING September 24-26, 2004 at the mouth of the Bad River. The Lakota Heritage Society presented a historical re-enactment and cultural heritage pageant featuring the famous encounter from the perspective of the Lakota people. Other highlights included Lakota living history exhibits at Fischers Lilly Park and two performances by Brule, acclaimed Native American music and dance group. There were a variety of vendors and activities for all ages at several locations, Fischers Lilly Park and the adjacent Fairgrounds and Expo Center.

One of the most significant events of the entire Lewis & Clark Voyage of Discovery took place at what is now Lilly Park in the city of Fort Pierre, where the Bad River enters the Missouri in central South Dakota. There representatives of the United States of America met for the first time officials of the great Lakota Nation. The interactions teetered on the brink of becoming seriously hostile. The Lakota controlled this section of the river and surrounding land. The confrontation was diffused, largely through the efforts of Chief Black Buffalo, and the expedition continued. The flag of the United States was flown for the first time over present-day South Dakota at this council with the Lakota.

The expedition proceeded upriver from Chapelle Creek. Captain Clark walked along the shore of Elk Island, which was covered with cottonwood trees, red berries, and grapes. He saw herds of buffalo in the distance, and smoke from a prairie fire. It has been speculated that the Teton Lakota, camped near the Bad River just above, were signaling other tribal members to join them

The expedition made camp that night in a cottonwood grove on the east (north) side of the Missouri, across from the mouth of Antelope Creek. While the men were cooking their evening meal, three Lakota boys swam across the river to their campsite. They reported that 140 lodges of the Teton Lakota were camped on the Bad. The boys were given tobacco to take back to the chiefs with an invitation to meet the next day in council. Members of the expedition rowed them back across the river in a rowboat.

In the morning Lewis and Clark moved upriver, picking up their hunter, Private John Colter, from Farm Island where he had camped the night before and killed four elk. They passed a mile-and-a-half long island (today’s La Framboise) on which they saw many elk and buffalo, and named it Good Humored Island, in reflection of their good spirits that day. They turned northward and arrived at the mouth of a river their maps called the Little Missouri. The captains renamed it the Teton in honor of the Teton Lakota who camped nearby. The Lakota called it the Bad, and that is the name which has survived.

After sailing and rowing thirteen miles that day, the expedition anchored the 55-foot long keelboat in the Missouri River, 100 yards in front of the mouth of the Bad River. Clark reports that the Bad was seventy yards wide at the mouth. His men took him ashore in one of the rowboats. At what is today Lilly Park in Fort Pierre, Captain William Clark met and smoked a pipe with Chief Buffalo Medicine, who had come down from the main village on the Bad. They agreed that Captains Lewis and Clark would meet with all the Teton chiefs the next morning.

Captain Clark returned to the keelboat. One-third of the men came back to the area of Lilly Park and camped there, joined by five Lakota who had been following the expedition from the shore. Sergeant John Ordway said these men “slept with us friendly.”

Captains Lewis and Clark designated a sand bar thirty yards in front of the mouth of the Bad River as the place for the council. A shade was erected near a staff flying the United States flag. At about 11:00a.m. Grand Chief Black Buffalo, Chief Partisan, Chief Buffalo Medicine, and about sixty members of the Teton band of the Lakota Nation arrived for the council. Ordway wrote they “came flocking in from both sides of the [Bad River].” After sharing food and smoking, Captain Lewis began his speech about noon. He soon ended when he realized the Tetons were not understanding his interpreter. He commanded his men to parade under the colors.

Black Buffalo and the other chiefs were invited to tour the keelboat, where they were presented gifts and entertained with the firing of the air gun. Captain Clark conducted them back to Lilly Park in the pirogue (rowboat with six oars). He wrote, “As soon as I landed the pirogue, three of their young men seized the cable. The chief’s soldier hugged the mast, and the second chief [Partisan] was very insolent both in words and gestures . . . declaring I should not go on, stating that he had not received presents sufficient from us. His gestures were of such a personal nature, I felt myself compelled to draw my sword, and made a signal to the keelboat to prepare for action. At this motion Captain Lewis ordered all men under arms in the keelboat. Most of the warriors appeared to have their bows strung and took out their arrows from the quiver. Grand Chief Black Buffalo then took hold of the rope and ordered the young warriors away.”

Clark was not permitted to leave the shore, so he sent his men back to the keelboat for reinforcements. The pirogue soon returned with twelve armed men. The swivel gun on the keelboat was loaded with sixteen musket balls; the blunderbuss on each of the rowboats was loaded with buckshot. The boat guns, and the soldiers’ muzzle-loading guns, were pointed directly at the Lakota, whose numbers had now grown to about one hundred. (The men of the expedition numbered forty-four.)

The Lakota counseled, and both sides stood down. The captains went upstream to a willow island on the west side of the river to camp for the night. Clark writes, “I called this island Bad Humored Island, as we were in a bad humor.” (Bad Humored Island was later named Marion’s Island. In 1907 the Chicago & Northwestern Railroad built a bridge over the Missouri River, crossing the north end of the island, and rerouted the river channel east of the island, which thus became part of the mainland. The Fort Pierre Holiday Inn Express is very near the original location of Bad Humored Island.) Black Buffalo and three other of the Lakota accompanied them at the camp that night.

The expedition and Black Buffalo together traveled four and a half miles to his village, where a feast and celebration were being prepared. The west bank of the river was lined with men, women, and children from the village. They anchored 100 paces offshore, in the vicinity of the present-day swimming beach and camping area of Oahe Campgrounds No. 1 and 2.

Grand Chief Black Buffalo’s village consisted of about eighty lodges, or teepees, located on the plain west of the shore, with some 800 inhabitants. In the center was a large council house, made of dressed and sewn skins forming a three-quarters circle, where about 70 men sat in a circle. Captains Clark and Lewis were carried on decorated buffalo robes to the council house, and seated on white robes. Chief Black Buffalo raised the pipe of peace from its stand of forked sticks and pointed it to the heavens, the four quarters of the globe, and the earth. After a short speech, he lighted the pipe and presented it to the captains to smoke. After more speeches, the group feasted on cooked dog, pemmican (buffalo meat and fat), and ground potato.

At dark, a large fire was made in the center, and the dance began. About ten musicians played on tambourines of hoops and stretched skin, and long sticks with deer and antelope hoofs tied to make a jingling sound. Five or six young men sang extemporaneous songs, while the women, highly decorated, danced. By midnight the captains retired to the keelboat, accompanied by four chiefs who spent the night.

The following day there was more visiting back and forth between the village and the keelboat, by the captains and the chiefs. Again many spectators lined the riverbank. The men of the expedition were invited by Chief Black Buffalo back to the large council house for another dance, which continued until about 1:00p.m.

Lewis and Clark and company returned to their keelboat, accompanied by two chiefs. As the pirogue approached the keelboat, the steersman misjudged, crossing the bow of the keelboat and cutting its cable. The metal anchor was lost in the river. As the keelboat swung around, Captain Clark in a loud voice ordered all hands to man the oars. This command and the bustle of the men to obey apparently alarmed the Lakota, and tensions began to rise. The chief hallooed the village and some 200 armed warriors appeared on shore. About 60 remained there all night.

After searching in vain for the lost anchor, the captains prepared to depart. Black Buffalo and other chiefs were still on board the keelboat. Several of the Lakota warriors seized the rope holding the keelboat, and refused to leave. Captain Clark negotiated with Chief Black Buffalo: he “spoke so as to touch his pride.” After more gifts (carrots of tobacco) were awarded, Black Buffalo jerked the rope back from his soldiers, handed it to the bowman, and ordered his men ashore. The confrontation over, the expedition continued upstream, pausing to replace the anchor with two large stones. Word was sent back to the Lakota via the son of a chief that “If they were for peace, stay at home . . . . If they were for war, or were determined to stop us, we were ready to defend ourselves.” That night the expedition camped on a small sandbar in the middle of the river, above present-day Oahe Dam and about three miles below the site of the Oahe Mission, now under the waters of the lake.

The expedition spent their last day in present-day Stanley and Hughes Counties. They camped near the mouth of Okobojo Creek, then continued on towards North Dakota and their meetings with the Arikaras and Mandan’s.